The history of polymers – how has our perspective on polymers changed?

Physics in Medicine highlight on our article on thermal detection of yeast:

Reflection on Bioinspired Materials 2018 blog: click on link below

My involvement with IUPAC: one year after being a young observer

Last year, I was fortunate to travel to São Paulo in Brazil to be an “young observer” of the IUPAC General Assembly. It was a bit mysterious about what this actually entails, but it meant a very hectic programme with lots of different meetings. We had a speed dating session with the different divisions of IUPAC that look at different aspects of chemistry and I ended up with the Polymer Division (Division IV). As a follow up this year, I was now invited as an official observer to the Subcommittee on Polymer Terminology (SPT) meeting in Cairns. Not a bad place to travel this too, especially since I was able to combine it with a short visit to Singapore (friend from university there) and a boat cruise to the Great Barrier reef afterwards.

To briefly explain what I have been doing over the last year for IUPAC: I have been working on the ‘Wiki’ project. Part of this work is adding in boxes to Wikipedia to provide the official IUPAC definition (see for instance https://en.wikipedia.org/wiki/Gel) and another part is to finish incomplete terms on Wikipedia. The good part is that the number of views of those Wiki pages has seem to go up (particularly during exam time!) and I learned how to edit Wikipedia. Since polymer terminology is in the name of the committee, we also spent a fair bit of time on putting together education material on polymers, establishing correct definitions (which can contain many notes), and discussing complicated nomen clature. The latter has been more challenging on my end, but by listening to experts in the field talking about these terms I have learned a lot and hopefully will be able to make a bigger contribution in the years to come. By the end of the sessions I have been able to get into a number of projects, including a follow up on Wikipedia.

Luckily there is more to SPT than just hardcore polymer work; we have also been socializing during the evenings with the hardcore members watching football matches, and had a social event on Friday. SPT has two co-social secretaries and they put together an afternoon/evening packed with fun activities. On Friday, we went out to the reefs at Green Island. The boat ride was a bit rocky but once we got there it was glorious weather and the beaches were stunning. A group of people went out on a glass boat tour but I took the snorkeling option. While I was not able to capture it with my underwater camera, the highlight of my day was spotting a turtle! A few other people were also able to get up close with the fishes and even a sting ray. After a quick change of clothes we headed out to a traditional Balinese dinner, which meant a buffet with various options. The week anyway has been packed with lots of good food, with nice pastries provided during the coffee breaks.

Overall: I have been able to get to know better a bunch of interesting people and continue to build on my work as a young observer from last year, now being a full member of SPT! I look forward to projects for the next year and now it is time to roll on Macro2018 (presentation is finished) and a visit to the Great Barrier Reef after.

Below: spot the fishes and mission cuddling with koalas! 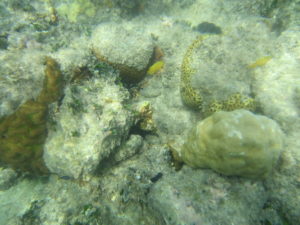 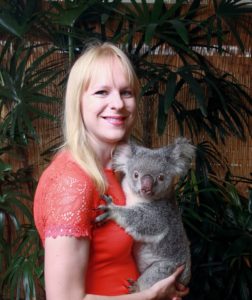 Two months after finishing the pairing scheme, it was time for Ben’s (senior policy officer DEFRA) reciprocal visit. My task was to show him how researchers at ManchesterMet interact with industry, do a lab tour, and demonstrate how much the university has changed after he graduated a few years ago (hopefully for the best, but the lift to labs remains dodgy).

Ben was lucky to visit on Monday when the Beast of the East had not arrived to Manchester yet, despite it starting snowing during our lunch. First up was a short tour and meet with Edwin Colyer, our impact coordinator, who presented facts and figures regarding industry involvement of our university. This was followed by a lunch with stimulating discussions with Kathryn Whitehead, who provided useful suggestions on how the government can reach out to farmers. She suggested academics should milk a cow first before talking to farmers, a challenge I would love to see my colleagues take up. The highlight of the day for me was the tour around the environmental facilities by Prof. Preziosi. You hardly ever come out of your own smelly lab as a chemist, but it was fascinating to see the other facilities we have in-house ranging from coral reefs to creepy crawlers. Ben certainly enjoyed visiting the frogs and commented his son would be jealous (and so was I). 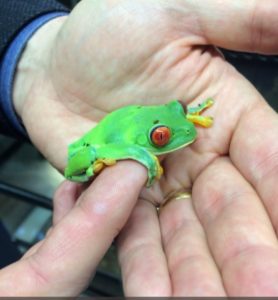 This little frog definitely felt very comfortable during our visit (it is not fake!)

Then, it was my turn to demonstrate the chemistry teaching facilities. This was ‘alien’ territory to Ben, but he could see the students at work. Finally, I could showcase my thermal testing facilities I mentioned to Ben at the week in Westminster. We are currently working on our commercial prototype (funding awarded by NC3Rs) and it is good to receive feedback from a different angle.

From a personal perspective, participation in the Royal Society scheme has been an amazing experience. It was an opportunity to network with a number of interesting people with different (research) backgrounds, with whom I hope to keep in touch. We were able to get a glimpse of the world of policy-making and the intricacies that are involved, giving us more respect for the hard work of civil servants. 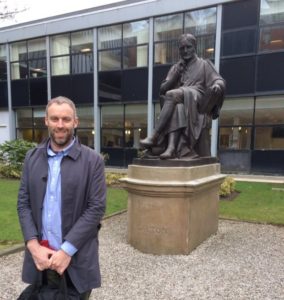 Ben Rayner (DEFRA) in front of the John Dalton Building, just a few hours before the snow kicked in

I hope the visit of Ben to ManchesterMet can be an inspiration for our students who would like to get involved with policy-making.

We look forward to his next visit to the university. Last week I told him all about the exciting plans we have to collaborate with industry; in a year he will be able to see how we can put this into place. I will also follow up on is suggestion to buy a proper coffee machine for my office.

After Brexit and recent comments of Michael Gove (“Britain has had enough of experts”), I gained an interest in how policymakers use scientific evidence to support their decisions. The Royal Society pairing scheme came exactly at the right time and I was surprised that they found a pair for me after months of waiting. Overall, I found it a very enjoyable experience – not just to meet the other participants that all came from different backgrounds but also to see what life of a civil servant was like (stressful).

The week started with Christmas shopping in London and a delicious Italian dinner in Covent Garden to meet the other participants. This was just a warm-up for the day after that was packed with information, certainly for someone who knows little about parliament and its many committees. It started off with a (long) tour with a very determined Swedish lady who directed us through the building. 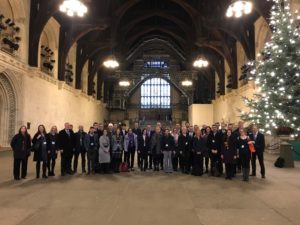 We were not allowed to take pictures, but it certainly was very chilly and the rooms in parliament were much smaller than I thought they were. Interesting thought: if MPs want to have a seat, they need to make sure they turn up on time! We then moved to Portcullis House where we had a range of presentations from POST (Parliamentary Office of Science & Technology), Campaign for Science and Engineering, Royal Society of Chemistry, and various others. It was surprising to me how those organizations, such as the RSC and Royal Society, spent on gathering evidence and they way to get your voice heard as a scientist would go through them. Over a long wait, we had a few talks including from Chi Onwurah (MP for Newcastle Central, I saw her at one of the late shows there) who actually turned out to be an ex-engineer. The day ended with a charismatic talk from John Bercow, who said he does not know anything about science but wants his daughter to be a scientist.

The following two days were the shadowing days. I was paired with Ben Rayner, a ManMet graduate in geography and conservation biology, who is a senior policy officer in DEFRA (see image below). 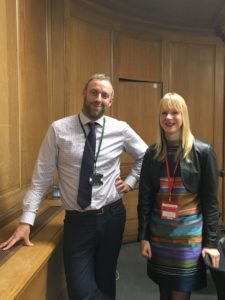 I heard of at least four other people that they were paired with civil servants from the DEFRA, and apparently, this department has doubled in size since the Brexit since all agricultural laws are made by Europe (it was described as the current “place to be”). What I learnt in the first day: civil servants use as many acronyms as we do at the university, which can make it difficult to follow conservations. The whole day was packed with meetings but contrary to university life, all these meetings were short and sweet (max 45 min). Time for lunch is limited and they can be called away at any time, such as receiving emails for ministers questions where a response within 15 min is required. Ben shared his experiences at ManMet and told me about is interesting career path from working at the local government working on environmental science (nitrate levels in the Peak District) to his current role at the DEFRA. We learned on the last day that civil servants cannot have a promotion within their current role, hence you will see that most of them were only in post for several months. They were also surprisingly young, I suspect that the majority of the people was younger than 30, and they all seemed to be passionate about their job. On the second day, I talked about my research to team and shared my experiences of working with Innovate UK and funding bodies. It was definitely interesting to get a flavor of how fast-paced the decision making process for civil servants is (they certainly work with different deadlines than universities). This also gives some insight in the frustrations there are between scientists and policymakers: if you need to gather evidence within 15 min, it is most likely that you will use Google too.

The night finished with a mock selection committee and the parliamentarian reception of the Royal Society of Biology. Luckily, the programme on Thursday was a bit more relaxed and gave us time to exchange experiences with follow participants and let the information sink in. The final presentation of the day by Chris Witty, Chief Scientific Adviser, was one of the most impressive ones of the week to me; he showed an example (ebola) of where policy can overrule scientific advice and how important it was to be impartial when providing advice to government (he certainly has a poker face).

Overall: met a bunch of interesting people, confirmed some of my skepticisms towards policy makers, but also gained more respect for the work that civil servants do. I look forward to the reciprocal visit of Ben Rayner to ManMet, would be interesting to see if the John Dalton Building has changed much since his graduation!

Women can do ‘difficult’ and ‘technical’ subjects just as well as men: It’s fine to stand out and follow your own path in science and engineering – Dr. Marloes Peeters, Lecturer in Chemical Biology at Manchester Metropolitan University 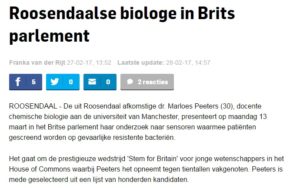 Atlas of Science, layman’s summary on the thermal detection of dopamine 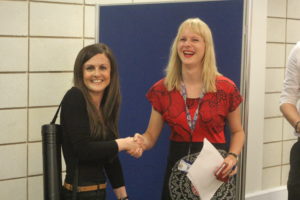 Justine Grixti (UoM) gets her poster prize from Dr. Peeters.